The 2018 Tournament Bracket is live, with the event less than a day away.

Who are your picks? Who is the Cinderella to watch for? Does a stout or dark beer take the title for the 4th year in a row? This years field includes entrants from 4 countries. A selection of the pastry-est stouts going today, world class lambic, incredible coffee beers, and an event that’s always filled with surprises.

The full bracket is below, but the PDF above is easier for zooming into regions

Every year we change the theme for region names. In the past it has been favorite Facebook beer groups, friends who have participated but not been able to join, and beer cliches. This year our theme we’ve chosen is Beer Fests we personally have been to and like. Note, there is no specific connection to beers in each region with the Region Name. It’s merely done to throw in some color rather than calling them East/West/Midwest/South. With that out of the way, here’s a short breakdown of the regions.

Great Taste of the Midwest

The #1 overall seed Prop 14 looks to have a good potential run through to the Elite 8. The bottom of the region is clustered with impressive coconut beers and 2 great stouts out of St. Louis breweries. This region features only 2 wilds and is the most stout heavy. Two Fremont beers are represented in this region, including Coconut B-Bomb, descendant of 2015 winner Coffee Cinnamon B-Bomb. Look for Prop to get toppled by the fresher coconut energy of Coconut B-Bomb to take the region.

The Wakefest region is lead by Shared Mexican Coffee Shop Vibes and Willet Bourbon Mexican Cake. This region includes 3 wilds.  There’s a pair of Rum barrel beers with Rum Black Tuesday and J Wakefield Darkbier. Though one of my own personal bottle submission is in this region, I strongly think Omnipollo BA Extra Maple Lorelei will be the star of this region.

This region is headed up by the highest ranked wild in the event, 2015 Fou Foune, and an old classic, Chocolate Rain ’14. This region has the biggest cluster of wilds with 6, and has the only IPA in the field with the freshly canned You’re Derek Jeter from The Veil. This region has the only 2 lambic bottles in the field. This is also probably the most diverse region as every beer is very much different in style or adjuncts. I’m a little biased, but I think Fou Foune takes the bracket. If Hommage can break out of its first round 3-way matchup, it might pose the biggest threat to take the FOBAB region from the #1 seed. 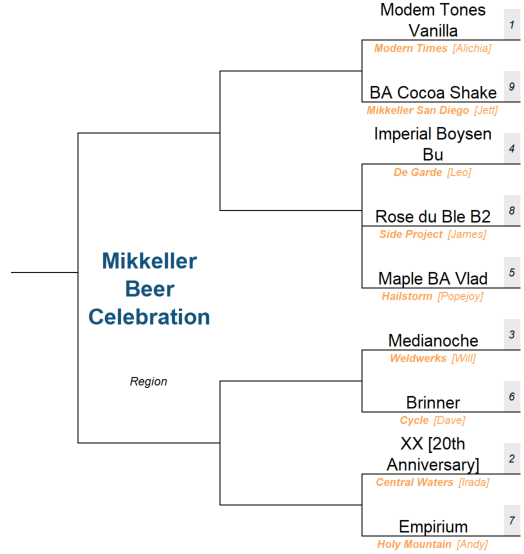 One of the hottest beers of February from Modern Times leads the way with #1 Modem Tones followed by Central Waters XX. This region includes 3 wilds including 3 of the best American Wild Ale producers in the country, Side Project, Holy Mountain, and De Garde. This region feels like the most wide open of any of the regions. This feels like region where a Hailstorm Maple BA Vlad could sneak through and go on a deep run. The relatively unknown Cycle Brinner with its maple and coffee might be able to over power the less adjunct laden Medianoche, and XX. With that being said, Vanilla has done exceptionally well in previous years including last years Champion, Grimm Sumi Ink, so I’ll take the chalk Modem Tones to come out of this region.

Want to follow along with the action? Posts on social media will have the hashtag #MMBST

View all posts by koelstorybro

This space was created to serve as a repository for unique bottle share events,  beer travel and takes on the craft beer scene in general